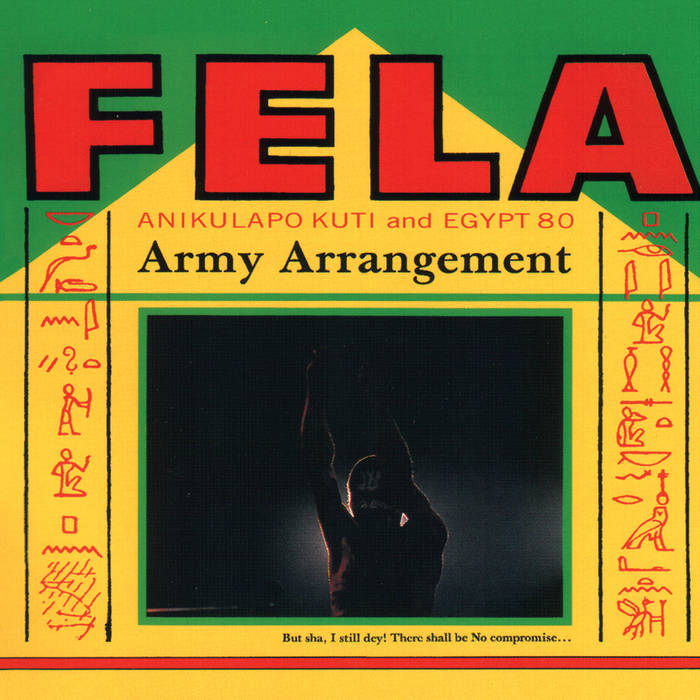 Army Arrangement: Army Arrangement is about Nigeria’s attempt at ‘democracy’ in 1979 after more than a decade of military rule. In 1970, Nigeria emerged from a three-year Biafra civil war with the largest standing army in black Africa, no financial debts – careering along on at least two million barrels of sulphur-low oil, pumped daily into the world market. With such revenue invested prudently in the Nigerian economy, there should be no reason for any Nigerian to live below the poverty line. However, with persistent scandals of corruption as the standard in every administration since independence, the army has lost all credibility to effect any change in the system. Especially since the arrival of the military in the political arena created the illusion of a peaceful ‘democratic’ participation in government. With the daily running of government carried out by civilians who reported to military bosses, Fela, I this song, calls on the people to be bold enough to criticize the government, because fear of the man with the gun would not put an end to the sufferings of the masses, who eventually pay for government mismanagement. He points to the foreign exchange scandal that prompted the military regime to arrest highly placed Nigerians. Most of them were tried and sentenced to jail terms ranging from five to fifteen years. But with the change from military to civil rule, most of the jailed socialites were released by the new administrations – a preview organized by the departing military regime that Fela accuses. Turning to the election issue and how the military manipulated the country by eliminating young political movements like The Movement Of The People (MOP) calling for a change in the system. Fela points to the fact that the military handed power to the same elite politicians who prompted the army to seize power earlier. He concludes that it is an arrangement dating from the ex-colonial rulers, who put the military in place to do their dirty work, and calls the whole political maneuver Army Arrangement.

Government Chicken Boy: Government chicken boy are what you could call ‘establishment boys’- believers of the establishment and the system. Fela compares them with the chicken, crowing at dawn like an alarm clock, waking people for the day’s job ahead. He sings: ‘…su! su! we dey chase chicken him dey run! Him go try to fly! Him go land with him mouth! Him mouth go dey drag for ground! Gerere! Gerere….!’. Government Chicken boy, like the chicken, could be chased away from the grain at will an recalled back to share the same grain again. Like tools of the system, they can be dispensed with at will. Fela says if you ask him where to find ‘government chicken boy’ – the answer is in government ministries and establishments, civil servants, police, army, commissioner, minister, and the president. The news media he also calls ‘government chicken boys’ because of the way they depend on Western sources of information. He also criticizes their organization structures and ethic – which he regards as not just a carbon copy of Western news media, but a poor imitation of them. Finally, Fela says that among these ‘government chicken boys’, you find some good people and bad people. For the good people, it is a big fight ‘na wahala’ for them to stay up-right and give good advice, but for the bad people have a disease called ‘shaky-shaky’. They are always trying to please the master even if they know he is doing the wrong thing – like chicken, they shake and say yes to everything.