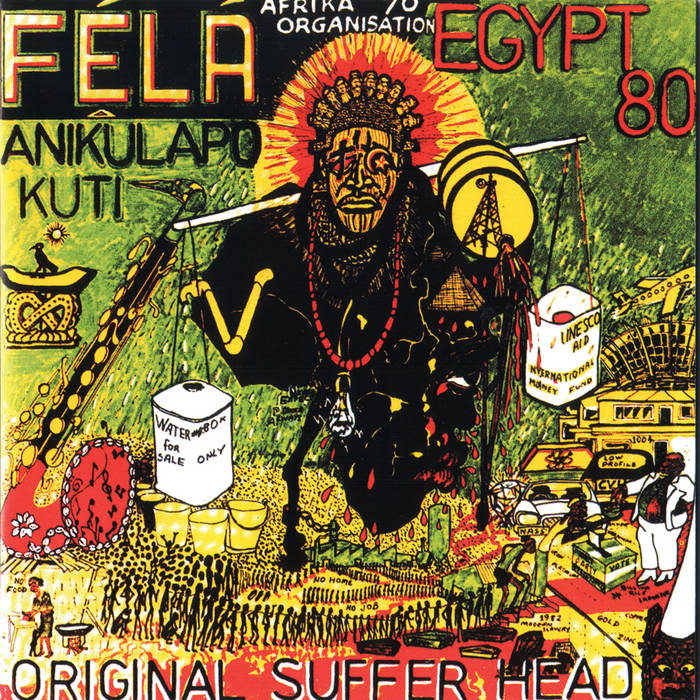 Original Sufferhead begins with a minimal and otherworldly improv with a Fela’s new band, Egypt 80, before building up into a bold, intricately structured Afrobeat anthem decrying the situation of the masses in Nigeria. “Let’s sing a nice song together,” Fela suggests, as the chorus parallels the agile melody of his of sax. He then, with the help of the chorus, launches into a list of the problems that plague the people: no water supply, the exorbitant price of living, no health care, double digit inflation. The “big big people” have turned the people into Coffin For Head of State: After the sacking and burning of Fela’s Kalakuta Republic in 1977, Fela wrote several musical responses directly attacking the culpable Nigeria government, inculding this mournful tribute to his mother, Coffin for Head of State. After his mother’s passing due to complications from injuries sustained after being thrown out a window during the raid on Kalakuta, Fela, his wives, and his followers carried his mother’s coffin to the front gate of the army barracks: a bold act of defiance. “Coffin For Head of State” is Fela’s somber excoriation of those that, “through Jesus Christ our Lord”, corrupt, steal and rob the African people. The song’s wlo, steady beat and repetitive structure mimics the march up to the barracks, while the lyrics directly address Fela’s overwhelming sadness over the loss of his mother and the state of his beloved Nigeria. a nation of permanent sufferers. Don’t be passive, he urges: stand up for your rights.

The B-side, Power Show, builds on the same theme, highlighting the ruling class oppression of the masses. The lyrics tell the story of a rich man in a fancy car who, pulling alongside a poor man traveling alone, verbally abuses the man. Fela calls this the “Power Show”, and excoriates the behavior - it’s not the right thing to do for your fellow human being.