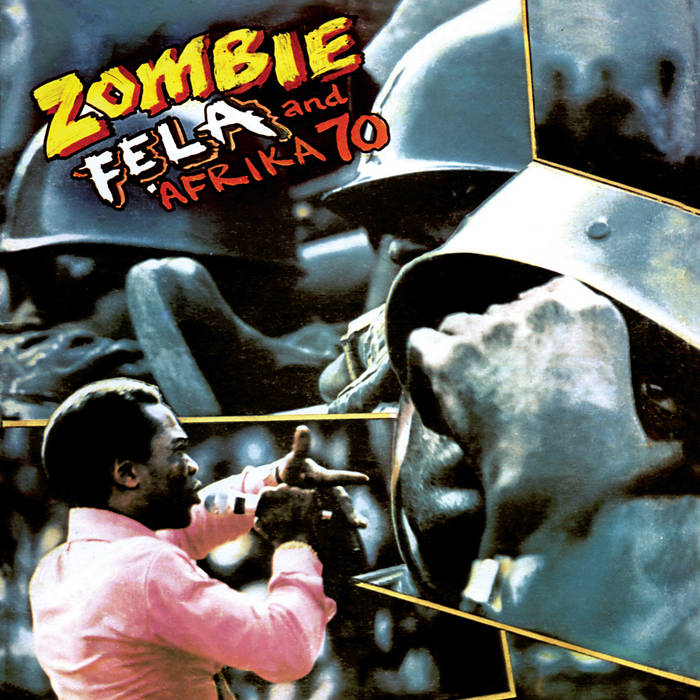 Moni What a combination of fire, humor and Afrika 70 at its peak! Classic! Favorite track: Zombie.

Zombie: Fela in his life time was never ‘a good bed-fellow’ of the military institution. As a political activist, he believed the army should operate under the mandate of a civil government. If national interest compels the armed forces to intervene in government, the army is obliged to hand over power to a new civil government elected by the people and enjoying their mandate. To do otherwise is to usurp power particularly since a soldier’s duty is not to seek a political mandate. For emphasis in the song, he narrates the military in motion comparing their orientation to the Zombie, without minds of their own. Fela paid a big price for this bold condemnation of the military institution. One thousand members of the Nigerian army attacked and burnt down his house after the release of the record. The tribunal set up to investigate the cause of the attack as a result of the public out-cry against the army, heard, as part of the evidence presented, an example of the Zombie album cover with the military uniform and boots displayed boldly. The army justification of the attack was that Fela treated the military institution with levity.

Mister Follow Follow: Mr. Follow Follow is about those who allow themselves to be led blindly by others. Since nobody can live in isolation, Fela sings about those who follow with their eyes wide open and those who follow with their eyes closed. Saying if you have to follow, it is better to follow with your eyes and ears open. For if you follow blindly, you will always remain in the dark: ‘…if you dey follow them book! Na inside cupboard you go quench!…cockroach dey! Rat dey!…na inside darkness you go dey! If you have to follow them books, you have to read with some sense, see with your eyes and hear with your ears’, he concludes.
Observation Is No Crime: For the first time, Fela’s listeners have the pleasure of a bonus UN-released track. Unlike all other works from these ‘Best Of’ compilations, ‘Observation Is No Crime’—is one of the few tracks Fela performed live but never recorded in the studio or released. Recorded live at the November 1978 Berlin Jazz Festival, Fela is singing about those who would like to stop him from giving his opinion on issues that involve the individual life: ‘Na oild I dey carry! Sand sand man no come spoil my own! (Meaning he is carrying a barrel of oil on his head and he does not want any sand-carrying man around him.). Literally comparing the delicate nature of individual life to a delicate barrel of oil, when oil falls into a heap of sand, it is difficult to recover the oil from the sand. Fela says he is given a mouth to say things he feels like saying, same thing for his eyes which are for him to see with. Turning to the government in Nigeria, who have always tried to silence him, he concludes by saying: ‘…Observation Is No Crime.’

Mistake: Mistake, another bonus UN-released or recorded track in a studio by Fela was recorded live at the Berlin Jazz Festival November 1978. The Listener could hear Fela say to the booing crowd: ‘I am sure you are still sitting down to hear more from us…to the Berlin audience who sat through a two and half hour concert performance of Fela and his band with boos and calls of ‘No Disco! No Travolta’. Fela was booed for being what they assumed to be a potentate and misunderstood as a jazz musician. Most of his critics could not understand how a man like Fela who campaigns against racism, at the same time travels and lives like a monarch, with harem and personal aids. Some critics of his performance at the Berlin Jazz Festival claimed he could not play the piano, was a poor saxophonist, and a jazz-festival is not the right place for him. These critics were there to express their own opinions, just as much as the young man at the stage entry who, in the last third of the well-disputed concert, shook his young head and said: ‘we’ll have to kill him or he will never stop.’ Can anyone imagine killing a man because a concert lasted longer than expected, and he does things his own way and, in so doing, gets the people excited to the point one feels like committing murder? That was how much Fela could touch people. In Mistake, Fela says: ‘When everything is all right—it means That’s good! When everything is not right—it means That’s bad. Nobody likes things to go wrong, but it is always a mistake that causes things to go wrong. There are two kinds of Mistakes, Fela explains in this song: Good Mistake—that is UN-intentional mistake, and Bad Mistake—that is deliberate mistake. Good mistake he sings: ‘…you fit repair! Bad mistake you cannot repair’. The mistake you make people laugh at you!, but you stand like man! After they come to apologize for laughing at you—that is good mistake. But the mistake you make, you cannot stand like man – that is bad mistake. Mistake is about government policies in Africa. The leadership when they make policies, and things go wrong, they fail to accept their wrong. Since no one is perfect, Fela calls on African leaders to take credit or blame for their policies whichever way the result. Putting soldiers in schools or burning down peoples homes are not right. The government should admit and take responsibility for their wrongs.